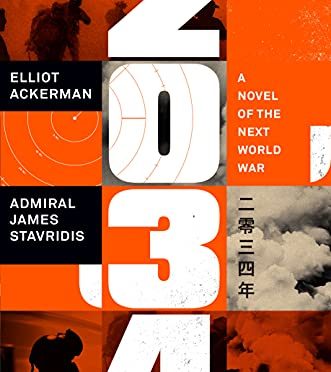 2034: A novel of the Next World War (by Elliot Ackerman and ADM James Stavridis) was recommended to me by a friend who thought I’d enjoy it. For the most part he was right, though not in the way I originally expected. See, when I first reserved it at the library, I thought it was a book on the order of Tom Clancy’s Red Storm Rising or Debt of Honor, where a world war starts with America at a disadvantage, but then the country turns it around and wins the day.

That’s not what this is.

2034 is more of a cautionary tale about the reliance on technology, particularly how it opens up the US to new forms of warfare. The surprises that China and her allies (Iran and Russia) pull on the US have to do with cyberwarfare, the invasion and disruption of communications networks and computers. US Technology doesn’t amount for much when it is neutralized or outright repurposed by enemy combatants. And when your technology fails, what options does a nation have when persecuting a war?

Part of what makes this a cautionary tale is that the book doesn’t include a lot of combat, and what combat there is finished very quickly. There’s a carrier battle in the South China Sea, and an invasion of Taiwan, but you don’t see those. You see the consequences, the shifts in the political board and the decisions that politicians chose, or feel they must, make.

In some ways, this reminded me of Guns of August, in that there’s the sense of inertia. You as the reader (and some of the characters) see a way out of the war without escalating, but the political inertia compels the nations to step down that path. Indeed, much of the first part of the book is the US reacting exactly as expected. Admiral Stavridis is experienced at high level military decisions, so I have to assume he’s bringing that experience to the book. In which case, oh dear.

Some people might think this is an anti-American book, which it really isn’t. It’s not saying America deserves to lose. It’s saying no one inherently deserves to be at the top, and there is danger in ignoring threats simply because you can’t imagine yourself losing. The patriotism of the book is to the American ideal, not to the political establishment. As one character thinks to himself, ‘… America was an idea. And ideas very seldom vanish.’

2034 is a book that makes you think. That’s what it was written to do. Not to entertain with cool battle scenes, but show you why those scenes would matter in a modern conflict and how much work has to be done before any conflict can start. Maybe you as a reader aren’t in a position to do much about that, but it’s still nice to stretch the mind to new ideas and perspectives. And this book certainly does that.

The road to hell is paved with works-in-progress.