Here you can find descriptions of my published works. 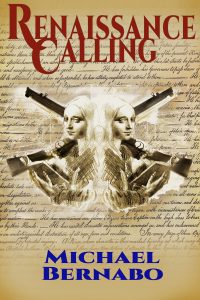 My first published book, Renaissance Calling follows Sasha Small, a young woman who lives in a future where technology has failed and a Dark Age has ravaged the globe. Frustrated with her life, Sasha becomes part of a group that fights for a Renaissance. This is the first book in her story.

Renaissance Calling was funded through a successful Kickstarter campaign. The Ranks of the Renaissance Army Page is a thank you to those who pledged their support