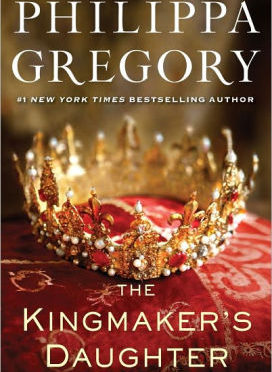 Book four in the Plantagenet and Tudor series is The Kingmaker’s Daughter. This book follows Anne Neville, daughter of Richard Neville, 16th Earl of Warwick, nicknamed the Kingmaker due to his influence on the throne of England. The Kingmaker’s Daughter covers about twenty years of her life (May of 1465 – March of 1485), and is the first book in this series that does not end at a later date than the previous books: everything we see Anne experience is something we’ve seen from another viewpoint.

Anne Neville is introduced as a young girl, scared of the ‘Bad Queen’ (Margaret of Anjou, wife of King Henry VI) and enamored of Elizabeth Woodville, wife of King Edward IV. The story begins as her father’s influence over Edward is waning, and he begins looking for other, more complaint claimants to the throne, including Edward’s brother, George, and Henry VI. Anne, with no influence of events, watches her sister be married to George and herself married to Henry’s son, Edward of Westminster.

When the rebellion leads to the death of her father and husband, Anne is received back in court as a pariah, tainted by her association with both names, yet because of the wealth of her inheritance, she cannot simply be cast away. She is eventually rescued by Richard, Edward’s brother and marries him to secure her safety. This puts her in position to influence Richard and eventually become the queen.

I found Anne’s growth in the novel to be primarily guided by fear.  As a young woman, she is afraid first of the  Bad Queen, then as an adult she becomes fearful of of Elizabeth Woodville. The Kingmaker’s scheming cost the queen several family members, and married Anne to a rival king, giving the Woodvilles several reasons to hate her. She has no control but suffers so much for the actions of her family.

Her first true decision in her life is to marry Richard. That gives her some agency and control. But her decisions are still guided by fear. She is afraid of the Woodville family and their supposed magic, fears poison and strange influences. This fear influences how she interacts with Richard, though its left unclear if Richard shares her worried or uses them for political gain.

The Princes in the Tower (potential spoilers)

We saw Richard reacting to the disappearance of the princes before, that he would be saddled with the responsibility even if it wasn’t his fault. His sentiment here is similar. What this book adds is Anne’s own contribution to the confusion.

Once Richard has seized power, Anne is fretting about the shifting loyalties of the major players of the kingdom. Lords who supported Richard turn against him, while others who defied him become allies. Anne mentioned to a Richard’s choice for Constable of the Tower that things would be easier if the Princes were to disappear.

When the Princes disappear, Anne becomes worried that she had accidentally ordered their death; that the Constable had heard her musing and taken it for an order. It’s not until much later that she finally gathers the courage to ask. The Constable says he did not – and would not have – killed the boys. He does not know where they are, or if they are alive.

Is that true? Who knows? Like all the other queens who’ve added to the confusion, Anne’s will is being acted by other agents, which adds a layer of potentially unreliable narrators to the story. I continue to doubt we will ever get a solid resolution, though there may be some subtle hints I’m missing.

Kingmaker’s Daughter is not a step above the previous books; I’d rate it the lowest of the ones I’ve read so far. That doesn’t make it bad. Anne is letting us see the whole story from another perspective, from the view of the king who was an antagonist in the previous two queens. It finished off the three queens of the end of the Lancaster and York families, and sets up the Tudors dynasty. But the way the fear drives her character development is frustrating, especially as we’ve seen these events through the other women’s eyes and we have good reason to believe she’s overreacting. Still, a good book to read.

December was a fine month; got a lot done, and still had time to celebrate the holidays. All while psyching myself up for 2022.

Added several thousand words to a number of projects, but the big news is I figured out all the plot points for The Colonel Lieutenant and I’m in a good position to complete the draft by the end of the month. Of course, I said the same thing a month ago. Will it work this time? I’ll let you know in a month.

Continuing with What we do in the Shadows. Finished off Hawkeye and started Book of Boba Fett. Also worked through the second season and various single films of The Goes Wrong Show which is outright hilarious. In terms of film I got out to see Spider-Man: No Way Home, which was a fantastic movie. Loves it, can’t wait for it to get released.

Slowed down a bit in December; only finished three books. One is a book with advise on how to make tabletop wargames (oddly enough, entitled Tabletop Wargames). Just for fun, in case some of my other projects take off.

Both the other books were hard reads: White Princess¸ Book 5 in the Plantagenet and Tudor Series, about Elizabeth of York, wife of Henry VII, who is often forced to submit to the whims of her husband and his mother (the Red Queen of Book 3) in humiliating ways.  The second is Last Girl by Nadia Murad, a Yazidi woman from Iraq who was a slave for Isis. It is her story, and while not graphic, it is not a happy read. Worth reading, yes, but not happy.

I finished the story for Horizon: Zero Dawn but I’m still playing through the side-bits. Lots of little quests and errands to run. Also finished the main story for Star Wars: Squadrons, the VR-flight game. That was also a lot of fun, but knowing how the Star Wars sequel trilogy goes sapped a lot of my enjoyment of the end video.

Started up two other story games. Halo Infinity on the console and Warmachine: Tactics on the PC. Halo is a first person shooter, but unlike other Halo games there’s an open world element to it, which I’m having fun exploring. Warmachine: Tactics is a game version of the tabletop wargame (which I also play). I kickstarted it a long time ago but never got around to actually playing it. Now I will.

In Pen and Paper, we finished up the Alien RPG, which was phenomenal, though since we were playing through a pre-planned adventure, I’m not sure how a custom built campaign would run. My Pathfinder 2E game is moving along nicely, and I’ve worked out some of the endgame for that.

I do not have anything on the schedule at the moment; during January I’m going to sign up for one or two conventions this spring and summer, and send some emails to breweries for Books and Beer events. Hope to get back out there soon.

The difference between fiction and reality? Fiction has to make sense.