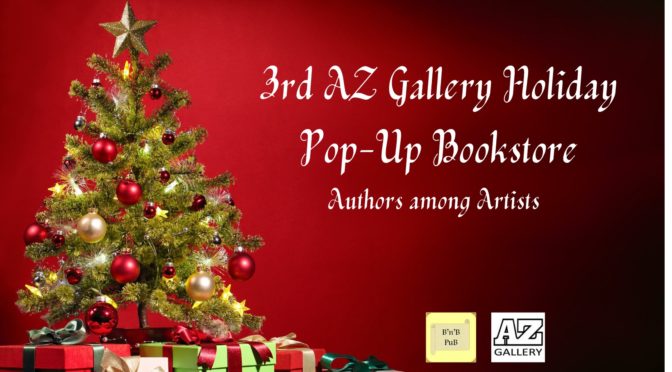 November was a busy month, with a trip out of state for a family birthday, then a trip back home for Thanksgiving taking up two whole weekends. What free time I have had has been geared towards my upcoming pop-up bookstore (see below for details), but I still managed to get some writing and, just as importantly, some planning done.

I got The Colonel Lieutenant to well over 20,000 words, which is nice. What’s even better is that one of those scenes proved to be a blessing. While writing it, I realized I was going about one of the subplots completely the wrong way. Now, I have a much better idea of how that will play out. My goal is to get a rough draft done by the end of the month. Doable, but a stretch.

Not much work done on Orcfyre or Tales of the Templars, but I’m still picking at them.

Worked myself to the end of Season 2 of What we do in the Shadows. Still enjoyable, but not bingeable. Saw the first two episodes of Hawkeye with family over Thanksgiving. Looking forward to how that plays out.

Got out to see Dune in the theaters for my birthday. Overall I liked it; they kept to the story but got the feel of the Dune universe. Also saw Shang-Chi when it got to Disney+. A lot to like about that movie, though I could nitpick it if I wanted to.

Managed to finish an impressive five books over the month, getting me well over my 36 books for the year goal. Now I’m aiming for 45 books.

Knocked out two more books in Philippa Gregory’s Plantagenet and Tudor novels, the Red Queen about Margaret Beaufort and the Kingmaker’s Daughter about Anne Neville. Expect Book Reports on those soon.

Also read through the graphic novel Harlem Hellfighters about the 369th Infantry Regiment in World War 1, an all-black regiment that fought valiantly in the trenches, often to be ignored by the government of their country. Very hard to read as they author and illustrator don’t hold back from the crap those soldiers had to experience.

During my out-of-state trip I read through a Warhammer 40K eBook, Yarick: Imperial Creed. This is a book set about 40 thousand years in the future in a grimdark science fantasy universe, and covers the first campaign of one of the celebrated heroes in that universe. I’d give it 3 of 5; parts of it are pretty enjoyable, but what could have been a book of political intrigue quickly became ‘nope, it’s spiritual corruption’, supported by a cast of copy/paste characters whose names I’ve already forgotten. At least the character came off well.

The fifth book I finished was a re-read; Call to Duty, the first book in the Honorverse prequel series Manticore Ascendant. Set in the sci-fi universe well before the grand battles of the Havenite wars, the characters of this series have to rely on ingenuity instead of technology to solve their problems. I’m rereading the series in anticipation of the fourth book being released early next year.

Still working through Horizon: Zero Dawn. Maybe about half-way through the main campaign and a bit into a DLC storyline. Still enjoying the game, though like a Farcry game I’m wondering if it’ll keeps its balance between exploration and story.

In pen-and-paper news, one of my gaming groups is working through an Aliens RPG by Free League Publishing. Set after the events of Alien 3, the game puts your characters in the dystopian future of the Xenomorphs. The game, though, is fascinating as it it built to function much like a movie. Our characters have hidden agendas, there’s the possibility of PvP conflict, and the combat is fast and brutal. It’s a simple system but we’re having a lot of fun playing it.

On December 18th I’m running the 3rd AZ Gallery Pop-Up Bookstore, with nine authors set to display their books. The gallery will be showing their Tiny Artwork, all artwork is less than 10 x 10 inches and $100. It’ll be the first pop-up bookstore since 2019 and I’m excited to run it.

Other than that it’s keep writing and keep reading. Hope you all had a good Thanksgiving and will have a great holiday season. Cheers!

October was a good month. I figured out the last few big hurdles for my big projects and read a lot. I also completed the Inktober challenge, one drawing a day for 31 days. My drawing is getting better (though it’s not great), but the big thing is comfortable I am with showing some of it off. It kind of reminds me of my writing group preparing me for publishing a book, in that getting used to a small audience prepares you for a bigger one.

The third book the Renaissance Army series (tentatively titled The Colonel Lieutenant) is at just below 20,000 words. The good news is I figured out one of the subplots and worked out the events of the book, the last few hurdles I was dealing with in terms of preparation. A few minor things I’ll have to puzzle out, but I can at least get a lot of writing done.

The big re-write of my first fantasy novel (Orcfyre) is coming along. I wrote the ending chapters of the book earlier this month, because I needed to know what characters I had to introduce and what themes to play up. Maybe it’ll change, but for now I’m working up to it.

As for short stories, I’m still working on a couple. Want to have the first Tales of the Templars collections out next year sometime, so I’m trying to work out what stories to put in. If you’ve read Templar Scholar, feel free to head over to the voting page and chose which ones you’d like.

Haven’t watched too many new things recently. Still working through What We Do in the Shadows, the vampire comedy show, about an episode every two or three days. I do like it, but I’m well into the second season and I’m wondering if the characters are going to stagnate. Since it keeps getting renewed, I don’t think it’ll be an issue.

Managed to get through four books in October. Reread Dune in preparation for the new movie. Started a new series, ‘The Plantagenet and Tudor novels’ by Philippa Gregory, a set of historical fiction novels working through the War of the Roses and the following histories. Reading them in chronological order, I got through Lady of the Rivers and The White Queen. Also read through the book 2034, a novel about the next world war and the impact of cyberwarfare on its outcome.

Finished off Black Book, a video game set in Russia in the 1870’s. The main character is a witch, but in Slavic mythology that means something different than what we’re used to in western practices. Her quest to gain power to retrieve her dead fiancé delves into eastern mythology, and the company that made the game (a Russian studio) took efforts to help the translation to a western audience. The gameplay itself is pretty good, combat being done as a card game where new levels unlock new combos. There wasn’t a single fight I got into that I couldn’t figure out with what I had on hand.

Started up Horizon: Zero Dawn as the next story game. An adventure game with the same feel as a Farcry game but far sci-fi. I’m maybe a tenth of the way into the game, but it managed to pull a fantastic surprise on me. I don’t want to spoil it, but the introduction game was setting me up for a very different game than the one I found myself playing. It was fantastic.

I’ve got a Books and Beer event coming up in December at AZ Gallery, so at least a chunk of November will be set aside to deal with that. No other events planned, but I expect to get into a couple in 2022.

Substitute ‘damn’ every time you’re inclined to write ‘very;’ your editor will delete it and the writing will be just as it should be.