As a vacation this year, I spent a week at a cabin in the woods.

No, this was not some Unabomber shack with a hamster-wheel for generating electricity.  It was a nice cabin in the north woods of Wisconsin, complete with running water, electricity, and better cell reception than my apartment just outside of Saint Paul (thank you, Verizon).  It is the family cabin of a man who has been my friend since kindergarten, and they were kind enough to let me use it. 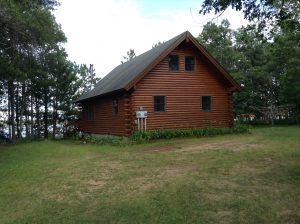 Now, it may not be as exciting as traveling Civil War Battlefields or foreign countries, but it was just what I needed.  Time to read, write, and just reset.

I was excited to grill out.  I’ve never done it by myself, having lived in apartments for all of my adult life.  I grilled out the first three nights, trying corn (did not turn out well), brats, salmon, chicken, and pork chops.   I even mixed vegetables, coated in oil and season, wrapped in aluminum foil, and grilled those.  Turned out pretty decent.

Non-grilling was mostly sandwiches, eggs for breakfast, toast with jam or various fruits for snacks.

I was halfway through Mockingjay when I got there, finished it by day two.  Lovely reading on a porch, though some areas better than others depending on the location of the sun.

Go through two graphic novels: The Dark Knights Returns, which I’d realized I had read before when I was much younger, and the White Donkey, a serious story about a Marine who goes to Iraq and back.  Both were good reads.

I also read through Atlas Shrugged for the second time.  No, I’m not a philosophical follower of Ayn Rand, but I think she is a terrific writer, and I wanted to see if I could understand a few things that did not make as much sense the first time.  And, truth be told, I did understand a bit more.  But not greatly.  I still spent some time researching specific questions afterwards.  Also, still couldn’t make it through the 75 page speech.

The reason I don’t draw much at home is lack of a drawing space, which is why I’m making a concerted effort to keep my dining room table clear.

I brought up a couple of drawing books I own (including one that thinks Delta Force uses giant swords).  Did a couple of practice drawings that turned out better than I thought they would, but by no means am I going to start hiring out my skills.  But I did get some drawings done, and that counts for something. 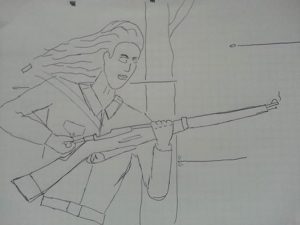 This was the main reason I went out there.

I wanted to finish a second book.  Not the sequel to the book I’m trying to publish, but the first in a fantasy trilogy.  I was about a third of the way through with it, but I hadn’t taken the time to sit down and get it done.  This was my chance.

I spent some time outlining, readjusting this or that, trying to get through three or four chapters a day.  I wasn’t sure I could actually finish it, but I thought I could come within striking distance.  The only annoyance was that I was using a laptop keyboard, and I’m use to ergonomics for most of my typing.

Tuesday night was the big change.  It was the only night where I had problems sleeping because of heat and humidity, so I spent the night writing.  I think I finished six chapters before I crawled into bed at three in the morning.

Wednesday I managed to slam home the rest of the book, even with a forced break when my laptop overheated.  Typed so much my hand cramped up for a few days.  But I got it finished. 50,000 word rough draft, but it counts.

Yes, this day gets its own entry, because it was a very informative day.

When I was preparing for the week, my friend mentioned the cabin had a TV and Blu-ray player.  Now, I’m a technophile, but I was looking forward to getting away from the videos games and computers and distractions, which is why I spent a week in the woods instead of sitting on my couch playing video games.

Anyway, with the book wrapped up, I decided to watch something.  I had brought my Blu-ray collection of HBO’s Rome, and started watching it.

Immediately I felt like I had gone back into some cocoon.  Watched Wednesday, and continued Thursday.   All Thursday I didn’t read or write, didn’t try drawing, just zoned out.

I’d known for a while how much more I get done when the TV is not on at home, but going from five days of ‘got this done’ and ‘got that done’, to ‘I should do something after this episode’ was like jumping from a sauna into a snow bank, only the end result was less ‘exhilarating’ and more ‘frustrating’.

It made me realize just how toxic my apartment atmosphere is, and not because the building sucks or anything, but because I get too distracted by the giant TV to write, or draw, or clean, or host.  Yes, I enjoy the TV when I’m watching a movie or playing a video game, but I don’t need to turn it on every day, especially not when I’m going to watch something I’ve seen a dozen times before.  It’s been something I’ve been working on since I got back.

I returned with a second book roughly written and a desire to keep moving on my writing career.  And all the work that leads up to that.

Writer’s block is a disease for which there is no cure, only respite.