The following is a monologue I wrote for a fun event earlier this month.

Hello, kind traveler, and welcome to the last coffee shop you will visit. Here, at the Coffee Shop Betwixt Life and Death, we invite you to sit back, take a moment, and decide if you wish to return through the front door, or take the elevator to your final destination.

Now, do not be hasty. This is an important decision. Chose your drink wisely, for the flavors are not just for the tongue, but the soul as well.

Wish to remember young loves and lost romance? A rose tea latte will bring back the stirrings of the heart.

Have a desire to speak with your long-departed mother? A café au lait will bring her back to you.

Perhaps you wish to feel a pang of excitement? Then, I might suggest a hip matcha latte. Just trust me, it’s exciting.

If you have a philosophical mind, some smoky herbal teas will bring back your memories of wisdom, assuming you have any.

Take as long as you’d like, but be warned. Here, at the Coffee Shop Betwixt Life and Death, you are a patron because you have a choice. Time is fleeting. Stay too long, and that door behind you might just lock itself.

So, my dear, what memory do you wish to pursue? Love or Anger? Happy or Sad? What emotion, what vision do you wish?

I’m sorry, you had a question?

Oh, you misunderstand. You drink to decide if you will go back or forth, not if the elevator will take you up or down.

If that is your worry, then I suggest a cup of black coffee. It will not give you wondrous visions, but it will sober you up, so to speak. It may tell you that you have chances yet to save your destination, or reveal that you are too far gone to one extreme or another.

No, black coffee is not fancy nor flavorful, but it is sometimes what you need to make the important choices.

What’s that, you ask?

Well, if you add cream and sugar, it wouldn’t be black coffee, now would it?

Here at the Coffee Shop Betwixt Life and Death, these things matter! 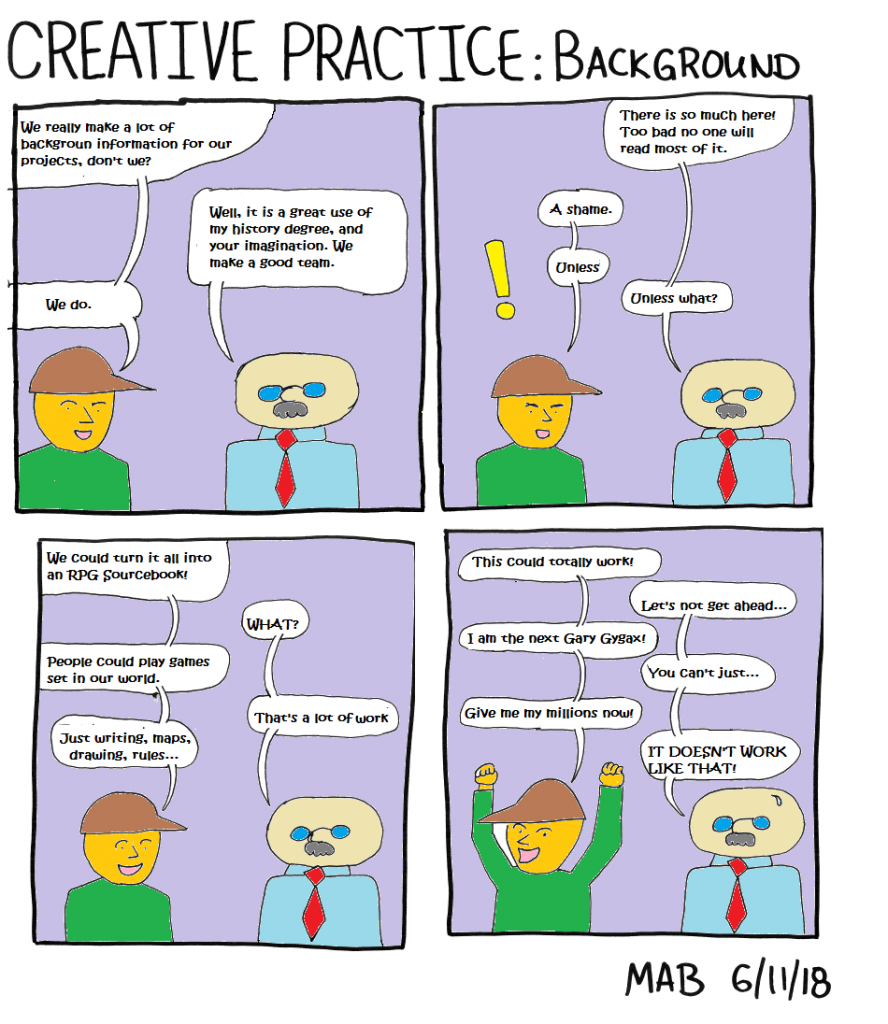 My time at Manticon 2018 was a great success. So much so, that I have a hard time coming up with the best part about it. I keep remembering this conversation or that exchange. And I don’t want to bore you with a minute by minute account of the weekend, so instead, a quick list.

10 Great Things from Manticon 2018 (in no particular order) 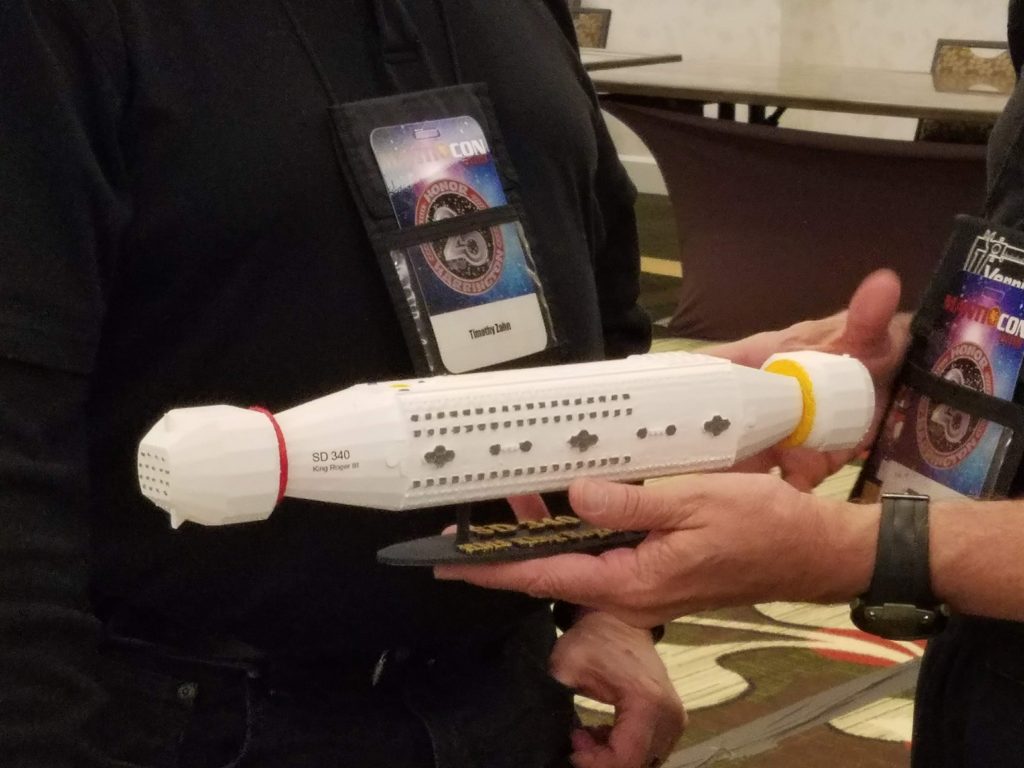 I got to sit next to Timothy Zahn, an award winning novelist whose tableau of books on his table was impressive. I spoke with him a couple of times, took a picture with him, even got him to sign some books for me. Then, as icing on the cake, he bought a copy of my book. I was flying pretty high after that.

Another writer I sat next to, Jan is a Czech science fiction writer. It was interesting to hear about his stories. And he’s running an Indiegogo campaign to translate his stories into English. I’m looking forward to seeing it in print, and reading science fiction from a new point of view.

There were other writers there I got to interact with. One group writes a post-Civil War steam punk graphic novel. Another author writes a lot of stories and goes to conventions all over the state. He gave me some good advice on some things I could do in the future. Always nice to interact with other authors.

One of my favorite T-shits is a writing themed shirt. I’ve gotten more compliments on it than any other I’ve ever had. So, for the convention, I bought a few others. I figured it makes sense to have a theme. They were a big hit. People who came by the table Friday came back Saturday and Sunday to see my shirts. So, that’s a win.

I’ve been looking for something to grab attention, but big static displays always worried me. As soon as Book 2 comes out, they lose some of their value. So I got a digital picture frame and loaded it with some wallpapers, things to try to grab attention. It did get some attention, though I might want to work on some of the wallpapers. At least, changing them out isn’t a problem. 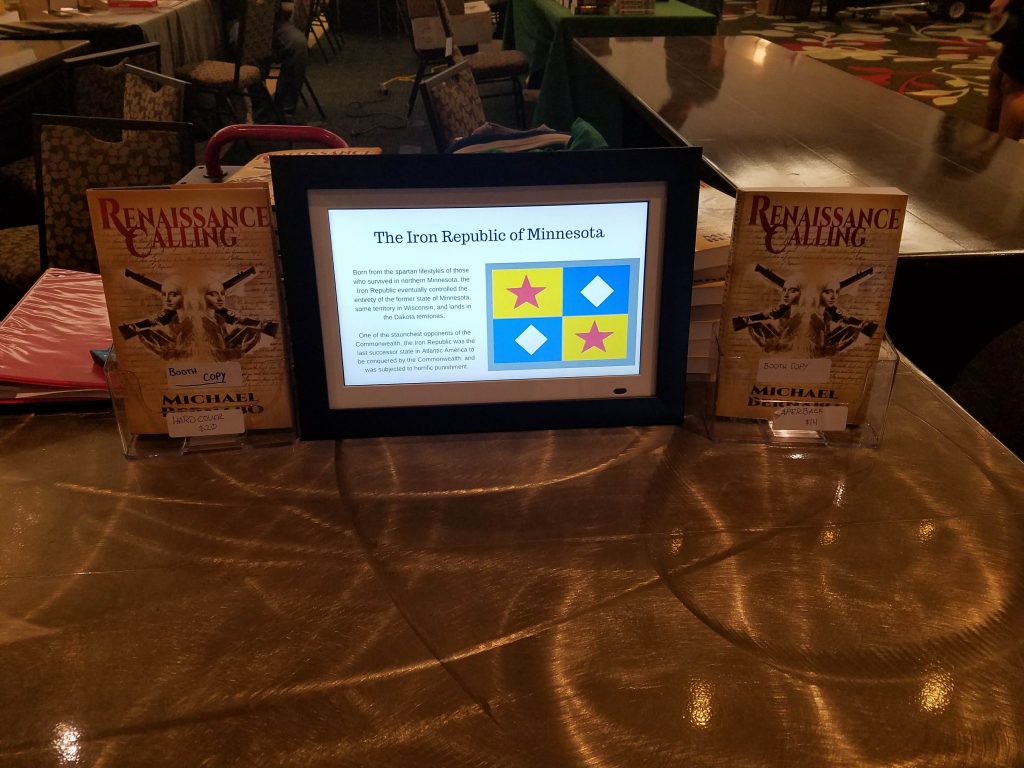 A local comic and game store had some tables there. I talked with the general manager, who gave me some info on how to get my book into his store. I’ll have to give that a shot sometime.

Fans of the Story from Last Year

People who bought my book last year came up and asked about Book 2. It was nice to get that sort of feedback.

Fans of the Story from Two Days Ago

Two people bought my book on Friday. By Sunday, both came to tell me they were almost done and that they looked forward to Book 2. I was smiling after that.

There was a booth there from the Threadmancer, an embroiderer who makes patches, some to designs, some custom. Why am I including this one? Because she is willing to start making patches for me from the Renaissance Army series. I think it’d be cool to have a collection of nice looking patches, much better than what I can do with Bitmaps.

Manticon is an official Honor Harrington fan convention, and as such, brings a lot of fans who are part of their organization. The Royal Manticorian Navy has uniforms, medals, and rank structures that simulate their fictional counterpart, and they take pride in a lot of their uniforms. It’s fun to see all of them together. 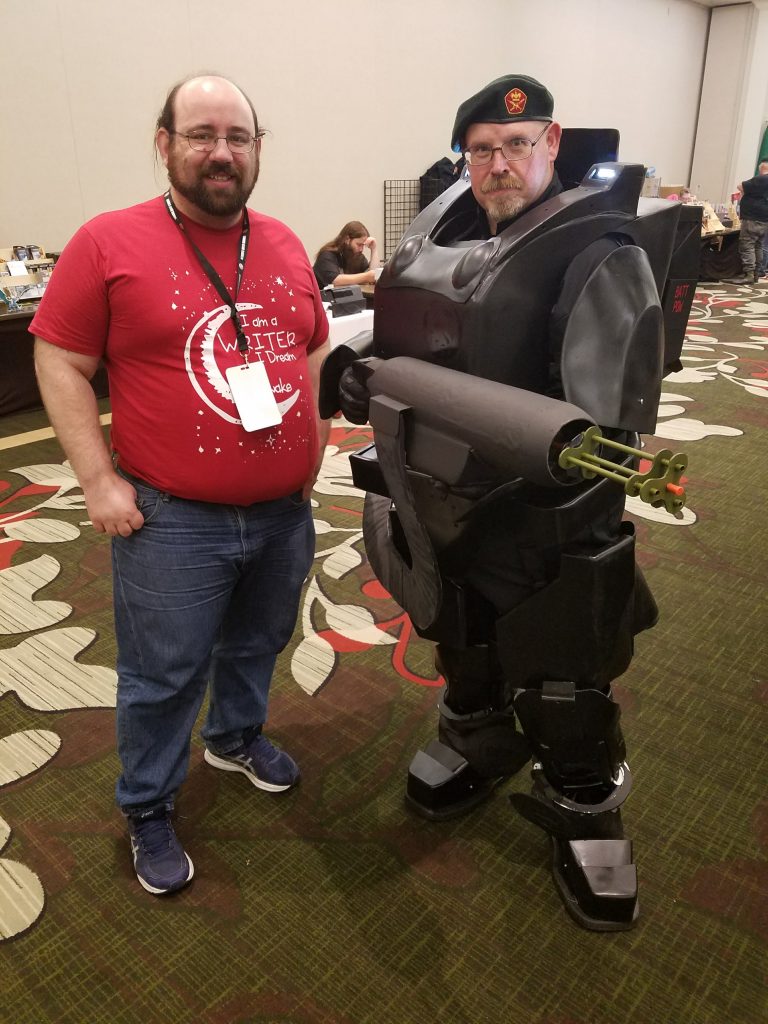 Definitely a fun time. Now, on to Books and Beer!

Writer’s block is a disease for which there is no cure, only respite.