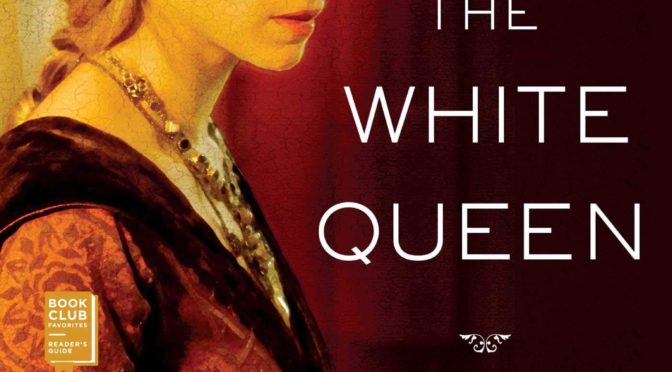 The second book in Philippa Gregory’s historical fiction series, The White Queen follows Elizabeth Woodville, from her first introduction to Edward of York (Spring of 1464), their marriage and coronation, through the War of the Roses, to the elevation of Henry VII and the nominal end of the war (April 1485).

First off, I want to say that this is a new experience for me. Other historical fiction series I’ve read fallow the same character or characters through their run. In this series, however, each book is from a different point of view. Elizabeth Woodville is the daughter of Jacquetta of Luxembourg of the first book. They are characters in each other’s stories, but otherwise there’s little overlap. Indeed, Jacquetta as a character in this book seems a much more political animal than she did as the POV character in the first book. I expect this to continue through the series, as we see the same actions through the lenses of different POV characters, particularly when we see through the eyes of their enemies.

Much like the first book, the character has some minor supernatural gifts; she knows when people she’s related to have died, and possibly summons storms and spells comes into play with the Princes in the Tower (see below). And as the first one, these are used as plot devices without unending the story.

Also, in similarity to the last story, there was a bit of ‘What did you think would happen?’ going on, though it had a different flavor. When Elizabeth weds King Edward IV, it changes the political landscape of the kingdom. Edward can no longer be wed to a foreign princess, or to an influential noble. Elizabeth then has to use her influence to put her family (a relatively minor family of nobility) into positions of power for their own security. But doing so invites the danger from other nobility. It’s a real ‘what came first, the threat or the act?’ Did the Rivers family invite danger by securing their position? Maybe. Yet if they hadn’t, they’d have been susceptible to much lower threats that what they eventually ran into.

There are several characters in the story I very much like: Elizabeth’s older brother, Anthony, a bibliophile after my own heart, whose dreams of poetry and pilgrimage are constantly disrupted by real life. Edward IV is a fantastic character in the story, even as he commits the Machiavellian acts a king of the time must do to secure power. Both of them were fun characters to read about.

The Princes In the Tower (Spoilers)

This is one of the few things from the War of the Roses I was aware of, so it’s one of the things I paid most attention to. What surprised me was what the author did with it.

The history of the mystery is simple. Edward IV died; his sons, Edward V and Richard, Duke of York (12 and 9, respectively) were kept in the Tower of London by their uncle, Richard, Duke of Gloucester.  Before the coronation of Edward, they were declared illegitimate, and Richard took the crown as Richard III. The children eventually disappeared. The fact is, no one knows what happened to them, and explaining all the theories would be a whole blog post in and of itself. For more info, check the Wikipedia page.

In this book, Elizabeth Woodville loses her son Edward to the Tower, ostensibly awaiting his coronation as king; she’s then put under pressure to send her other son, Richard, to follow. But Elizabeth does not trust Uncle Richard, and spirits her son off to hiding in Flanders, sending a lookalike in his place. When rumors of the disappearance begin to swirl, it is unclear who is responsible. Elizabeth is especially concerned because she has not heard the music she usually hears when someone has died. So she believe Edward is alive, but cannot prove it.

In my favorite scene of the book, Richard III covertly visits Elizabeth in Westminster Abby and inquires about the whereabouts of the princes, hoping that Elizabeth has spirited them away. He is upset because all of this will be laid at his feet, regardless of the actual culprit.

‘They will call me a monster.’ [Richard] pauses. ‘Whatever else I do in my life, this will cast a crooked shadow. All that everyone will ever remember of me is this crime.’ He shakes his head. ‘And I didn’t do it, and I don’t know who did it, and I don’t even know if it was done.’

Elizabeth does not come to any conclusion on the matter of responsibility. There is some indication it was Richard, but it’s never resolved if he’s responsible.

I’m curious to see how this all plays out in the future. Does Gregory assign blame to one party or another or does she leave the mystery alone? How does Elizabeth sending her son into hiding come into play in the future, or will that plotline disappear? I’ve got several books to read and find out more.

I liked the book. It was a good second story in the series, and continued the intrigues of the War of the Roses and the ridiculousness of monarch politics of the era. I’m remember to take the stories with a grain of salt; I have no idea if the characters involved were as Gregory writes them, or how much liberty she’s taking with their lives.