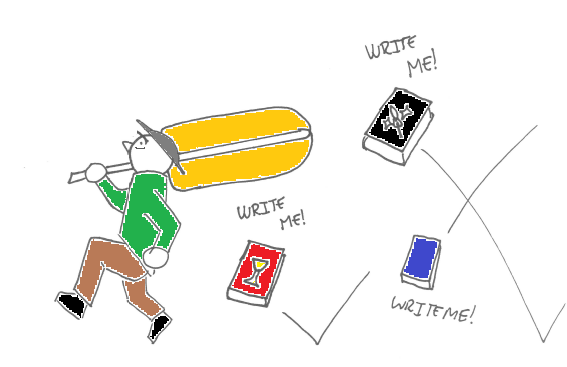 I want to take a moment and write about the projects I’m working on. Specifically, about how I decide what projects to focus on and which ones to put on hold.

In preparation for this article, I sat down and worked out every project that I’ve done some work on. This does not include passing ideas that I’ve thought about, only things where I have put something on paper or saved to the cloud. The question was ‘How many books am I trying to write?’

I came up with 29 distinct projects, some organized into larger fictional worlds, while others are standalone books. And while I was coming up with this list, I found that I might be able to condense a number of the fantasy and science fiction projects into fewer projects. But for the purposes of this article, I’m going to continue with the original 29 projects.

12 of those projects I hadn’t done enough work to figure out how many books they might turn into, and two of them are strings of short stories that would probably just be anthologized. So, of the remaining 15 projects, how many books are planned?

That’s quite a lot. That’s more books than years I’ve lived. So I better get writing.

Seriously, though, looking at this list of projects, I’m already sure a lot of them aren’t going to get written. Not because I don’t want to write them, but because I probably just don’t have the time. It’s one of the reasons I try to set a lot of my fantasy and science fiction stories in the same universe; so I can re-use the same geography, politics and mythologies in different stories.

Just for fun, the numbers of projects by genre:

My main focus right now is on the Renaissance Army series, which counts for three of the projects and ten books (seven main-line books, two short-story anthologies and a prequel). Even then, it wouldn’t surprise me if I find other stories to tell in the world. In fact, I’m almost certain I do, I just haven’t gotten to them yet.

My goal with the seven main-line books is to publish one a year. Now that I’ve got Renaissance Calling under my belt, I feel pretty confident I can get those seven books out. I don’t know that it’ll be one a year, but I mean to give it a go. I’ve been paying attention to my process, figuring out how I can outline better, paying attention to what trips me up or disrupts my process. Basically becoming more proficient.

My secondary focus is what I’m calling the Orc-kin series, a set of seven trilogies that follow half-orc characters through the centuries of a fantasy world. I’ve written the first book, and I’m writing the second, with others being aggressively outlined as I go. At the very least I’d like to publish the first trilogy. I might not go so far as to publish all seven trilogies, but outline them all and then only publish the best ones. I don’t know yet.

How do I decide what else to do?

That is the question, ultimately, of this post. I have so many ideas, things I honestly believe are good stories. How do I decide which ones to write?

When I look at the other projects, I imagine all the work I need to do to bring them to fruition, and it can get a little daunting. Though depending on the genre, maybe for different reasons.

With the Fantasy projects, I can get all but one of the projects into the same world, but one of them is going to be stand alone. That certainly makes world-building easier. It’s more likely I’ll publish a fantasy story next.

Science Fiction can be difficult because so much of the science fiction I’ve been reading has been particularly heavy on the science (see David Weber’s Honorverse or Andy Weir’s The Martian). I imagine my own science fiction will have less math in it, and more fiction. Although I have been using the Kerbal Space Program to learn orbital mechanics.

You didn’t answer the question: how do I decide what to do?

Oh, you noticed that, did you?

The fact is, I’m not sure which project (other than the Renaissance Army series) I will focus on next. Yes, I’m one book into the first fantasy trilogy, but I want to write the whole thing out before I revise, so I’m two books away from advancing that series. I have a lot of resources for the historical fiction books, but I haven’t gone through them and organized them. And I keep getting worried about the science in my science fiction stories.

So, the answer is, honestly, whatever I end up working on. Other than the Renaissance Army series, I end up jumping from project to project pretty quickly, working when inspiration strikes me. For all I know, I’ll have a burst of insight and speed write a science fiction book for NANOWRIMO. We’ll see.

In the mean time, I’m making progress on Book 2.

I write for the same reason I breathe – because if I didn’t, I would die.